In this section we describe alternative setups for your course.

In a course at this level students should access the RStudio IDE through a centralized RStudio server instance, which allows us to provide students with uniform computing environments.

It should be noted that the goal isn’t to completely dissuade students from downloading and installing R and RStudio locally, we just don’t want it to be a prerequisite for getting started. Teaching personal setup is best done progressively throughout a semester, usually via one-on-one interactions during office hours or after class. The goal is that all students will be able to continue using R even if they no longer have access to departmental resources.

If you prefer to not use RStudio Cloud, you might consider one of the following approaches.

One approach that might work particularly well for higher level courses that require a shared infrastructure and higher end computational resources is running academically licensed RStudio Server Pro on a powerful server (e.g. 32 cores, 512 GB RAM). If this server is in the department, instructors can be given direct control over all aspects of the computing environment.

The figure below is a sketch of the architecture of the centralized RStudio server approach, which shows that students connect to a single RStudio server instance via a departmental login. This works well for upper division and graduate level courses as most students are directly affiliated with the department. Students taking courses who are not affiliated with the department are issued temporary visitor accounts which expire at the end of the semester.

More modest configurations can be more than adequate (e.g., a mid-to-high end desktop) for the vast majority of use cases, however care should be given when working with larger datasets in a shared environment. An alternative approach is to use a virtualized hardware in the cloud (e.g. EC2, Azure, etc.).

The primary benefit of running and managing the server in-house comes down to control - as needed the instructor(s) are able to install and update software, change configurations, restart or kill sessions, and monitor all aspects of the system. This does increase the demands on the instructor and any involved IT staff, but we have found the benefits to far outweigh the costs. One other unforeseen benefit to a centralized approach is that it makes it possible to present large scale analytic tasks that would not be possible on a traditional desktop or laptop. For example, advanced courses can include homework assignments where students need to process a dataset that is on the order of several hundred gigabytes in size, which would not be possible if they were required to use their own system.

A second approach to running RStudio server involves the construction and hosting of a farm of individualized Docker container instances. A sketch of the architecture of the Docker containers is in the figure below, which shows that students authenticate via university login which redirects them to a personal RStudio instance running in a Docker container on either a local or cloud based server. 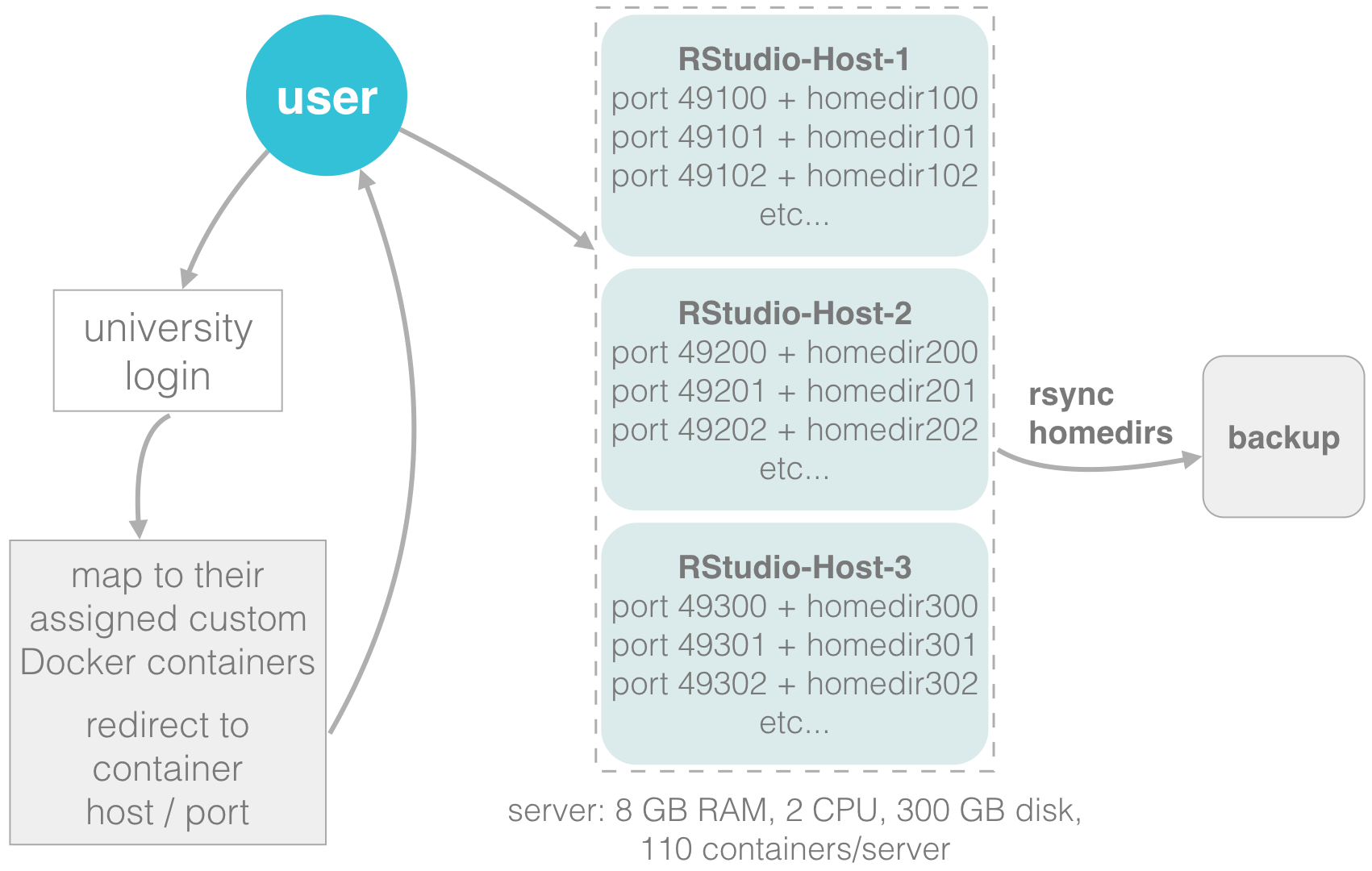 Docker is a popular and rapidly evolving containerization tool suite that allows users to automate the deployment of software in a repeatable and self-contained way. Each container wraps a portion of the file system in such a way that all of the code, runtimes, tools, and libraries needed for a piece of software are available, meaning that software will always run in exactly the same way regardless of the environment in which it is being run. As such, Docker is a powerful tool for reproducible computational research, since every Dockerfile transparently and clearly defines exactly what software and which version is being used for any particular computation task.

An additional advantage of Docker containers is that they are similar to virtual machines in that they are sandboxed from one another. By mapping each student to a single container we are able to keep all student processes segregated and enforce strict CPU, memory, and disk usage quotas to avoid accidental disruption of the work of one another.

However Docker containers are generally lighter weight than virtual machines, in terms of system resources used. This makes it feasible to run a large number of containers on a single system at the same time. Since most RStudio usage (particularly by our introductory students) is intermittent, we have found that it is possible to run more than 100 RStudio containers concurrently on a single server. Servers can be run locally or on a cloud-based service. The cost for the latter can be defrayed by the credits many services offer for academic use.

Further details of a containerized RStudio server approach implemented at Duke can be found at here. This repository contains a README which explains how the large-scale container farm is set up and also contains the Dockerfiles that are used to create the individual containers.

Implementing the infrastructure solutions discussed above can be overwhelming and time consuming. We encourage faculty interested in adopting these tools to partner with their departmental and/or university IT professionals. Additionally, building these partnerships can lead to collaborations that benefit the entire university.

If you would like to learn more about computing infrastructure for statistics and data science courses, we recommend the following paper.

A freely available version of the paper can be found here.